Search for that Second Layer 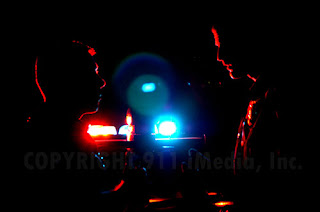 Last week I was recalling a story that not many people in my area can share. You see, there is this police officer who is known for being cold, intimidating, some might say gruff. Most folks view law enforcement this way, but in our town, it simply is not the case. We have some of the friendliest and most helpful police officers in the area with a high level of integrity.

Many years ago, my husband and I used to ride along with police, taking photos of the men and women who protect our community. I typically rode with the funny and sweet ones, always avoiding this one officer: Desmond. He was tall, with a strong jaw, sharp eyes, and you could see his strength underneath his pressed blues and bullet proof vest. He never acknowledged my presence, seemed to look down at me (well, he IS 6’4” and I’m 5’2” so that was easy enough), but I didn't feel welcome in his presence.

One night my husband and I walked into the police department, and only three officers were working. Rick and one officer headed out the door for an urgent call, the sergeant was doing paper work, and that left me, alone, with this giant gruff of a man. He looked at me, sighed, and said “let’s go.”

I could feel the tenseness of my intrusion as he moved his bags from the passenger seat to the trunk. And for the first thirty minutes or so, we didn’t say one word to each other. I just knew it was going to be a long awkward night! He fiddled with the radio and turned to a station that played popular music and asked “Do you like that music?” I replied with a chipper “Yes!” thinking, now we have something in common. He gruffly responded, “Great. You like the same crap my wife likes” and then switched the channel.

I felt defeated. How was I going to make it through the night! I thought maybe I could call Rick in a couple of hours to switch cars. As the clock ticked on, Desmond began to talk a little bit but only after I prodded him with questions like “How long have you been married? How many kids? Etc. Etc.” He humored me with his short answers.

A little later into the shift, Desmond thought it would be a good idea to take a break and have a sandwich at the local deli. He mentioned that I was like his wife in that I'm nice, bubbly, and sweet; and then he added that he wasn’t nice or sweet. Not even a split second after he said it, out of my unstoppable mouth came the words I immediately regretted, “Why do you think you are that way?”

He looked up from his sandwich and into my eyes. I thought “Oh, crap. I am about to be beat up by a cop in public!” I retreated in my seat and wished I could take the question back!

Desmond softly replied “I don’t know why. I need to think about that.” He shrugged with acknowledgement and took a bite of his sandwich.

Apparently, that was all that was needed for us to become buddies. Every time we saw each other after that, he would smile and open his arms wide and hug me. We tease each other every time we meet. Aside from his family and close friends, I think I am the only one in town who knows this side of him. I admire him for his career choice and how much he loves his family. And I am thankful he let me in to see his second layer, the softer, sweet side.

How does this relate to business? Oh, you already know the answer to that. When you meet someone who is gruff or surly, don’t brush them off. Look for that second layer, or let it happen serendipitously as it was in my case. Ask questions to determine their needs and learn who they really are so you can provide the best for them. Don’t let their sour attitude sway you. Just be yourself and success will follow!